The economy has been at the forefront of the past few elections, brushing the Cyprus problem aside. And not without cause, as the economic crisis has changed the priorities of each household. In the previous parliamentary elections of 2011, Cyprus society was experiencing the beginning of the crisis, while in these elections, of 2016, the public is experiencing its aftermath.

While the Cyprus problem has always been the main topic of discussion during election campaigns, the economy has taken centre stage in recent years. In the previous parliamentary elections of 2011, Cyprus society was experiencing the beginning of the crisis, while in these elections, of 2016, the public is experiencing its consequences t. The economic crisis swept everything in its path, changed the priorities and redefined the realities of each household.

This shift in society’s status quo has undoubtedly affected the parties’ election slogans and tactics, as criticism of political personalities is at an all-time high, while corruption scandals are flooding the media on a daily basis. The parties’ election agenda has now changed and is focusing on the real needs of citizens who lost their deposits and assets overnight. The election teams’ biggest nightmare is how to approach citizens, who view the political world with contempt.

Stability is the requirement

“Without doubt, the economy is dominating this election period; in fact I would say that all the election campaigns are focusing on the wound of unemployment. However, what I have noticed is that we haven’t actually entered the essence of the matter by discussing means of alleviating the phenomenon, but instead certain political parties are insisting on the accuracy of the numbers,” said DISY’s communication consultant, Andreas Hadjikyriacos. “Another matter dominating this election campaign is the matter of foreign investments. Everyone acknowledges how these are key to bringing growth to Cyprus,” he continued, adding: “In any case, I would like to point out that 2011 was the period in which DISY, as the Opposition, warned that measures needed to be taken. 2011 was the beginning of the crisis and the matter dominating the agenda was whether the government of the time was going to take measures. Unemployment had also started to slowly enter the election campaigns’ agenda, as it was then that it first started to show signs of rising. Today, DIKO is making promises, AKEL is refuting what has been done, while DISY is seeking to continue the economy’s steady course. DISY’s message to the people is that these elections are important. DISY is the stable prospect that took Cyprus out of the memorandum and reduced unemployment.”

According to Mr Hadjikyriacos, “another change I would note from 2011 is that political parties are not spending as much money on their election campaigns. The internet is absorbing the lion’s share, while over the past 10 days we have seen a more vigorous election campaign”. He concludes that “the core of the Democratic Rally’s election strategy is whether the citizen wants to risk the steady course of the economy”.

“The crisis is definitely affecting the parties’ economic agenda. The parties are spending less money and focusing mainly on the economic theme. The impact of the economic situation on each person, each household seems to count more. For this reason the issues of unemployment and labour relations are high on the agenda,” said Mr Pambos Papageorgiou, of AKEL’s communication team. “Compared with 2011, I think the main topics of the election campaign have remained the same: economy, Cyprus problem, unemployment. Back then however, the impact of the crisis on the average citizen was much less severe. The agenda focused more on how to share the burdens, but the big problem of the banks had not emerged yet. Unemployment had risen, but almost half of that had to do with non-Cypriots” he adds.

According to Mr Papageorgiou, “AKEL is currently focusing on the different way in which the economic crisis has affected Cypriots; it feels the government and DISY are following a harsh class-oriented policy that harms the masses and favours the few, the already privileged. This is why the party is particularly stressing the problem of growing income inequality.”

According to Mr Papageorgiou, “AKEL has positions, proposals and views on all aspects of economic policy, which in many cases differ to those of the other parties. Besides, AKEL is traditionally the party that represents the interests of the underprivileged. When you are carrying out a campaign, you cannot create a new reality. You cannot go against what I’d call collective experience”.

Turning to the real needs

“The economic crisis has affected the election agendas to a great degree as the economic crisis has changed Cypriot society. Cypriot citizens are not the same, they do not think the same, they no longer have the same priorities and same emotions,” said DIKO’s communication consultant Costas Panagopoulos. “The election environment has changed completely as the economy and society have both changed so much. The Cyprus problem is not at the centre of the election campaign because the positions of political parties’ and of citizens’ are a given. There is no part of it that is being redefined,” he said, adding: “In 2011 the parties were talking about an environment of growth, better days to come but also magnificent, positive prospects. Today they are speaking of stability. The requirement right now is to say something convincing that will convince the citizen that his life will improve. This is why our campaign has specific objectives: To cover the priorities with clear and realistic proposals. I am surprised to note that I don’t see similar proposals from the remaining the parties.”

According to Mr Panagopoulos, “DIKO’s priority in this election campaign is to improve the citizen’s everyday life. It involves a broad range of sectors such as the opening of the labour market, non-performing loans, protection of primary residence, small and medium sized businesses, and reducing tax rates, along with the certainty that the injustices will be righted. These issues are views and aspects on improving the everyday life of each citizen on an economic level; I would describe them as the principles upon which DIKO’s campaign is based,” he concluded. 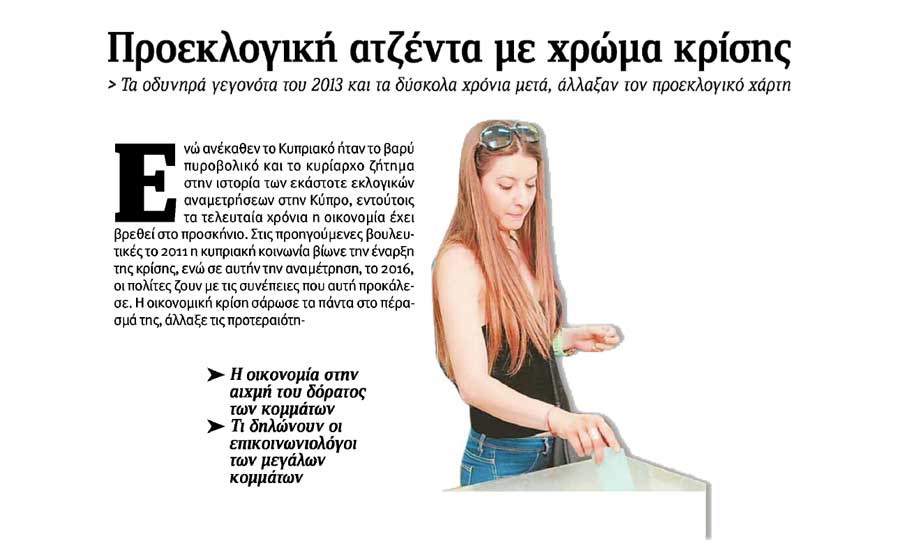 The article was published in Phileleftheros, 15/05/2016. By Demetra Landou.