GNORA Social Media Compass: The popularity of political leaders during 1 February to 1 March 2016

Political parties and politicians are increasingly turning to social media, not only because it is the cheapest promotion but because it offers an easy, direct and inter-active way to approach voters. Most candidates and leaders have one or more Facebook pages and a Twitter account where they post announcements, photographs, videos, comments and as a platform to make an announcement or reply to something of interest them. Cyprus is no exception. With the 22 May 2016 parliamentary elections approaching the political thermometer is climbing. GNORA’s Social Media Compass focuses on the inter-active nature of digital communication. How popular were the leaders of parliamentary parties in social media. GNORA’s survey tracked their presence on the two main social networks in Cyprus – Twitter and Facebook in the period 1 February to 1 March, 2016.

All political party leaders have an account on Twitter, which in the past eight years has been established as the leading tool for political communication. Most popular during the period was DISY president Averof Neophytou with 8283 followers followed by DIKO Chairman Nicholas Papadopoulos with 4915 and Citizens Alliance leader Yiorgos Lillikas with 4628. Andros Kyprianou, who only recently established a Twitter account (October 2015) was fourth with 1563, while Green’s general secretary Yiorgos Perdikis had the least with only 625 followers.

The most popular post in the period 1 February to 1 March 2016 was that of Neophytou “A degree should be a passport for work & creativity & not just another frame. Visit to @cutaccy”, which drew 91 likes και 65 retweets.
During the specific time period, Andros Kyprianou had the biggest increase in followers (+18.58%), followed by Yiorgos Perdikis (+10.17%). 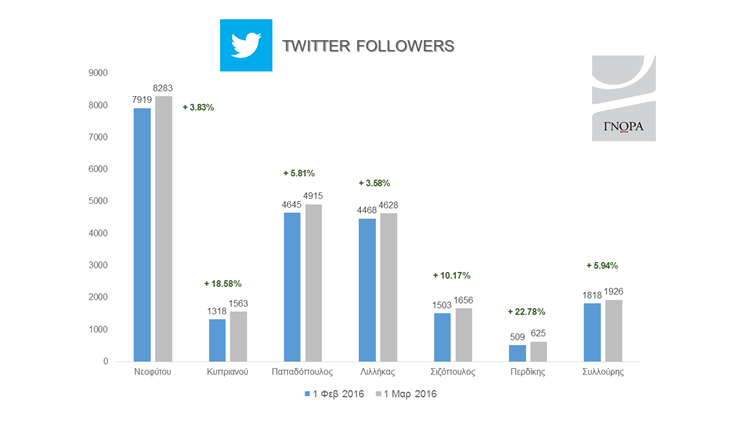 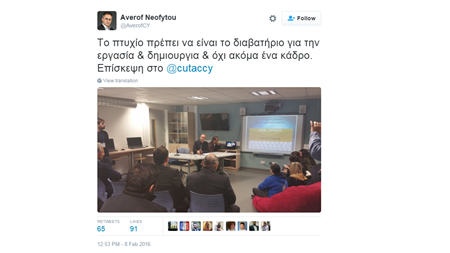 All political party leaders have personal accounts on Facebook, except for AKEL general secretary Andros Kyprianou. President of the Citizens’ Alliance Yiorgos Lillikas had the most likes with 9059, followed by Yiorgos Perdikis with 5934. Third in the Social Media Compass tracker was Averof Neophytou with 3551 likes, Marinos Sizopoulos’ official Facebook page had 1916 likes, that of Demetris Syllouris 1839 and that of the Nicholas Papadopoulos 649. The most popular post in the period was by Averof Neophytou “The change of pay scales for the nurses will cost €40m a year. If we had €40m I would day a 50% discount on the Immovable Property Tax for everyone” which attracted 116 likes and 18 sharers. Nicholas Papadopoulos had the biggest increase in the number of total likes (+50.50%), followed by Marinos Sizopoulos (+23.69%). \The hashtag for this year’s elections, so far is #CyElections. 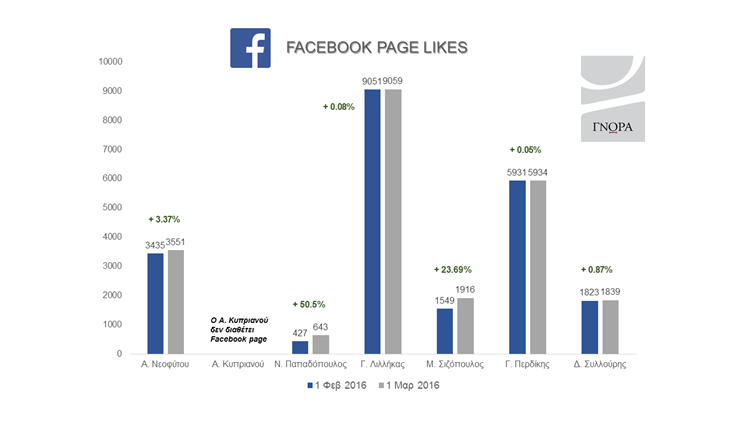 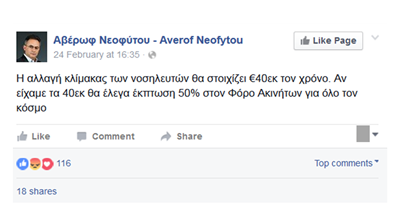 All parliamentary party leaders with the exception of Andros Kyprianou and Yiorgos Lillikas have a website or blog. Although politicians recognise and trust the dynamic and inter-active nature of social media, this does not mean they have turned their backs on personal websites or blogs. Nowadays, websites are used more for digital archiving of speeches, announcements, speeches and audio-visual material, rather than a platform for dialogue and the exchange of views. Eleni Theocharous is not included in the Social Media Compass results because she is not a leader of a current parliamentary party. She has 22165 likes on her Facebook page and 2085 followers on Twitter. Theocharous also has a personal webpage. 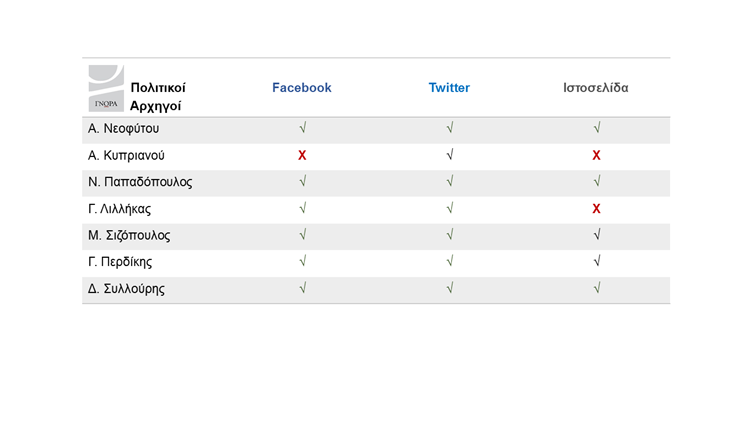 A platform for dialogue or self-promotion?

In summary, Cypriot political leaders, as well as candidates more generally, appear to fully recognise the role that social media can play in modern political communication and understand that effective use can to a significant degree affect the outcome of their election campaign and the political choices made by specific age groups, mainly the young.

Even though with time and the help of technology, the traditional ‘balcony’ political campaigning has moved to digital platforms, with keyboards replacing the podium, politicians tend to use social media as a means of self-promotion and not for two-way communication and dialogue with citizens. They post, but rarely reply to comments and even prefer party meetings or events to discuss with citizens. Direct communication through the use of social media is still fairly unknown in Cyprus.