Parties and political leaders: Who is winning the election battle on social media

The strength of political parties and political leaders on social media in light of the 22 May election are presented in the “Social Media Compass” index by GNORA Communication Consultants.

GNORA’s survey searched and measured the impact of political parties and political leaders on social media, with the measurement taking place on 11 May 2016.

The most popular party among users of Twitter, which over the past eight years has become established worldwide as the best online tool for political communication, was DISY, with 4,377 followers compared with AKEL’s 3,663. EDEK came third with 2,116 followers, followed by DIKO with 797. The Green Party and Citizens Alliance followed closely behind with 759 and 727 followers respectively. The Solidarity Movement has just 182 followers. 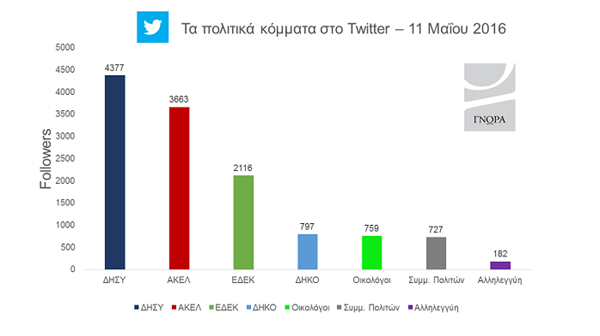 It is a different state of affairs on Facebook, according to the “Social Media Compass”. AKEL is in the lead with 9,860 likes, followed by DISY with 6,634. The Green Party is in third place with 3,924 likes and the Citizens Alliance in fourth with 3,620. They are followed by newly established Solidarity with 3,373 and EDEK with 2,553, while it is quite noteworthy that the third most powerful party, DIKO, has only 1,720 likes on its official page. 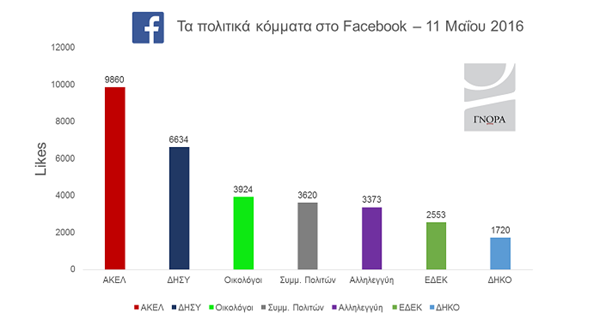 Political parties have their own channel on the popular video-sharing website YouTube. In terms of subscribers, AKEL takes the lead so far with 240 subscribers, followed by DISY with 189, Citizens Alliance with 84, EDEK with 60, Green Party with 44 and Solidarity with 21. While DIKO does own a channel, it appears to have deactivated public viewing of the number of its subscribers.

It is noted however that the number of subscribers does not necessary reflect how many views the videos have. Many users are not subscribers to the parties’ channels but watch their videos, as they can be accessed freely. For example, DISY’s election campaign ad on the party’s channel has so far been viewed 1,409 times. Some parties also used social media that specialise in promoting photographic material. DISY uses Flickr, while AKEL, EDEK and Solidarity use Instagram. 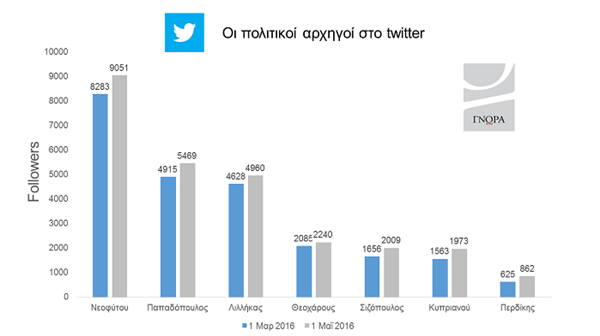 All the political leaders have personal Facebook accounts-pages, except AKEL General Secretary Andros Kyprianou. Leading the Facebook race is Solidarity Movement president Eleni Theocharous with 22,348 likes on her official page. It is noted, however, that Theocharous received the vast majority of her likes when she was a member of DISY. From 1 March 2016, the date of the previous Social Media Compass measurement, Eleni Theocharous’ likes have increased just +0.82%.

DIKO president Nicholas Papadopoulos achieved the biggest increase in the number of likes since the last count on 1 March, with 228.3%. There was also a substantive increase for Averof Neofytou (+7.85%) and Marinos Sizopoulos (+7.15%). 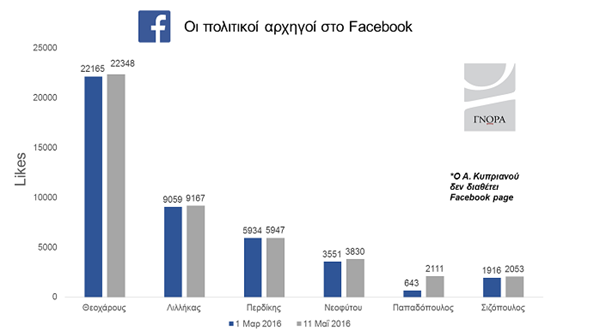 The digital field now plays a very important role the electoral battle with parties and candidates anticipating political benefits by broadening their impact. The parties and political leaders appear to acknowledge the power of social media, which is why they try to use them to the maximum.

The findings of the “Social Media Compass” index are in no way a precursor of the results of next Sunday’s election; and this because social media are mainly directed at younger age groups, which are currently recording the highest abstention rates.

But they do show trends and momentum, while confirming that social media are gaining more and more ground as time goes by, as opposed to traditional media (newspapers, radio, television) and traditional election campaign tools (brochures, leaflets, posters etc.)

They will play an even big role in elections to come.