As long as AKEL fails to find him, the success of 1988 takes on the dimensions of a political legend

Choosing George Vassiliou as their candidate for the 1988 presidential elections not only gave the party a way out of the impasse it faced at the time and led to an unexpected victory, but gave Cyprus a successful presidency. As a result, that bold initiative was recorded as a smart political decision. Whenever AKEL has faced problems in finding a candidate (1998, 2013 and today) AKEL has sought the new Vassiliou. And as long as it fails to find him, the success of 1988 takes on the dimensions of a political legend which overshadows the substance: whether it is utopian for the AKEL of today to seek a new Vassiliou. As in 1988, it was not just the abilities and personality of George Vassiliou which turned a bold initiative into a smart political decision. It was also AKEL’s ability to accept that the independent candidate it supported would differ from the party line, otherwise how could he attract votes beyond the party base?

At a time when the Soviet Union and the Cold War were still in existence and Leftists still chanted against the EEC and NATO at their rallies, AKEL tolerated George Vassiliou’s support for Cyprus’ Customs Union Agreement with the EU during his election campaign and his decision in 1990 to submit Cyprus’ application for EU membership. Today’s AKEL leadership was so intolerant of different views voiced by Mike Spanos on less important issues that it was prepared to pay the price of a U-turn rather than engage in a dialogue with an independent candidate, a dialogue that would have led either to a synthesis of views or an agreement to disagree. Also indicative of the winds of change at AKEL at the time, was the renewal of its parliamentary group at the parliamentary elections of 1991 and its opening to outside the party with the establishment of the cooperating New Forces. AKEL, which had suffered its biggest internal crisis in the period between 1985 until the party split of 1990 was bold enough in 1991 to retire its old guard and put forward a new face. This led to the paradoxical situation where, at a time when the Soviet Union was collapsing, the communist party in Cyprus was experiencing one of its best periods, winning the presidential elections of 1988, seeing its strength rise in the 1991 parliamentary elections (from 27.43% or 87,628 votes in 1985 to 30.63% or 104,771 votes) and electing a young leadership (in 1991 Demetris Christofias was 45 years old, Andreas Christou 43 and Nicos Katsourides 40). Therefore, finding a new Vassiliou is not enough. A new AKEL is also needed. Or rather, for a new Vassiliou to be found, AKEL must rediscover the necessary self-confidence and boldness and seek to cooperate with someone who both is and appears to be independent.

Rediscovering self-confidence as a party is in AKEL’s hands. On the other hand, compared to 1988, there are factors outside its control, which are inevitable and which it can do nothing to change.

The breaking of the bond

All this, in combination with the rapid social and technological reforms of the 21st century, have ruptured leftists’ sentimental bonds with the party. This does not mean AKEL’s search for a new Vassiliou is hopeless. But it is certainly utopian to be looking for a new Vassiliou without having first looked for and found a new AKEL. Can the new Vassiliou not have a presence on the social media (incidentally Mike Spanos does not have a presence on Facebook, Twitter or Instagram). If the answer in the 21st century is “no”, how can AKEL forbid its officials to have a Facebook account before the elections? In January 2016 (yes 2016), AKEL issued instructions for the parliament elections in which it prohibited candidates from using personal webpages, Facebook and Twitter for self-promotion. However minor this issue may appear in relation to the problems the party currently faces, it is indicative of the mentality.

AKEL of today is and appears to be excessively scared and nervous. So much so, that it is startled by noise, such as Spanos’ remarks. Its handling of these statements was far more damaging to the party than the statements itself. AKEL prefers the illusion of resolving problems by sweeping them under the heavy red carpet of its history, rather the recipe of 1988. Last July the Central Committee did examine the results of the parliamentary elections, the worst in the party’s history, but rejected the only proposal for action through an extraordinary conference to improve the state of affairs at the party, stem the decline in its strength and end the introversion. The most AKEL of today can expect from the search for a new Vassiliou is the reproduction of the image that the party itself reflects in the mirror. “The reality we ignore always waits for us in some dark corner. And it takes revenge on us,” as Yiannis Loulis noted in his book “The end of an ascendancy”. 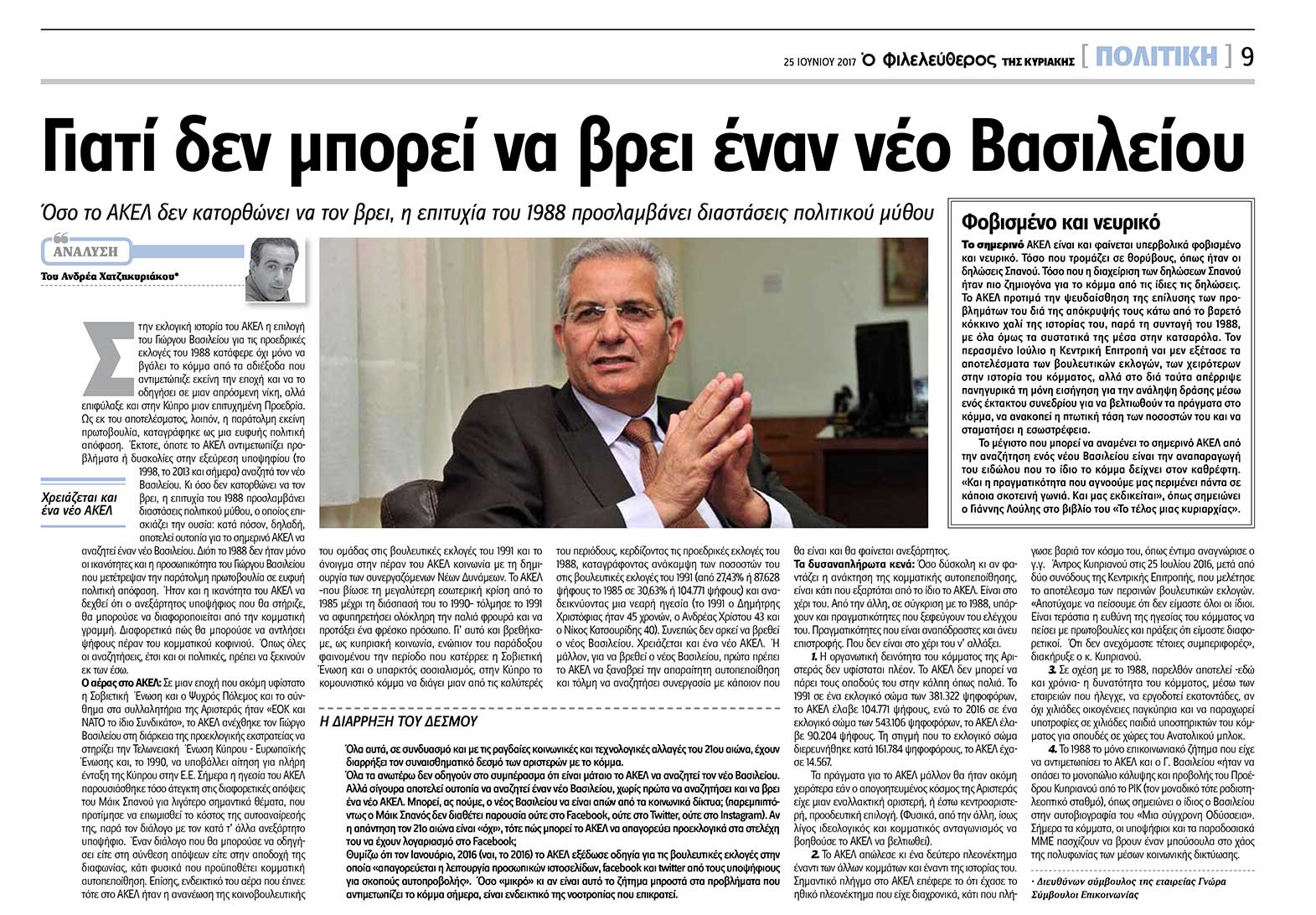